Mastercare Back-A-Traction prevents and rehabilitates by simple self-treatment suitable for all ages. It has a moving backrest which allows unique therapeutic exercises in 15° inversion. Mastercare is foldable, stable and has safety catches.
Mastercare has been sold throughout the world since 1987 by Mastercare AB in Skara, Sweden.

Kent Rohdin from Skövde, Sweden, was a case for surgery with imminent welfare pension. After four years of being put on the sick-list, a “fusion–surgery” was planned and all hope that Kent would be back to work again was gone. He is now 56 years old and can work fulltime.

Kent says “When I got an opportunity to try Mastercare everything reversed. Mastercare gave directly positive effects on my back problems. Now I do fitness training four times a week and live more or less a normal life”.

OVER 20 YEARS OF PROBLEM

Kent Rohdin has suffered from back problems for more than 20 years. After a herniated disc 1998 he could not work at all and after several evaluations surgery seemed to be the only option. hat was when Kent came in touch with Mastercare Back-A-Traction. “I was given an opportunity to try Mastercare for four months. It was important to start training carefully, but gradually I could increase the dosage. I can’t speak warmly enough about Mastercare and the effects it has had on me”.
Four years ago it was intended that Kent should have surgery at Ryggkirurgiska Kliniken (The Back Surgical Clinic) in Strängnäs, Sweden.“I mentioned to the doctors that four months of utilizing Mastercare had meant large positive improvements in the health aspect”, says Kent.
The examination prior to the surgery did not prove the same negative results as the pain evaluation had shown a few moths before and consequently the intended fusion-surgery did not occur. “I am enormously thankful for this today”, says Kent.

A great feature with Mastercare is the moving back-rest, which renders totally unique training possibilities.
“Furthermore, I have sort of “two tables in one”. Mastercare allows the possibility to perform a training program laying in supine as well as prone position where you also can receive massage in 15° inversion. To get a comfortable and mild stretching of the muscles is very positive since a pain problem means as good as always an increased contraction and tension even in the joints and ligaments.
In addition joints are slightly decompressed and it allows an increased provision of joint-fluid, which in turn starts the healing process.

Kent has always been interested in wellness and health maintenance. Exercises in Mastercare Back-A-Traction have been complemented with much fitness training.
Today Kent is usually training four times a week and is also engaged with Friskis & Svettis (“Healthy & Sweaty”) in Skövde, Sweden.

Kent has gradually improved his back. With certain salary benefit he was given the chance to start as a building worker at Göta Kanalbolaget (The Company Göta Channel). This was possible since Kent was enrolled in Galaxen, which is a unit for on site building workers injured at work. Since the fall of 2005 he has an employment at HSB Byggtjänst (HSB Building Service) in Skövde, Sweden.

“I am not completely well and will most likely never be, but thanks to Mastercare Back-A-Traction I can devote myself to manual work again which I didn’t believe was possible a few years ago”.

Kent Rohdin was more or less considered lost from the employment market. Thanks to continuous training in Mastercare Back-A-Traction he can today work fulltime. 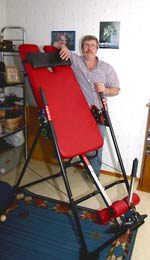 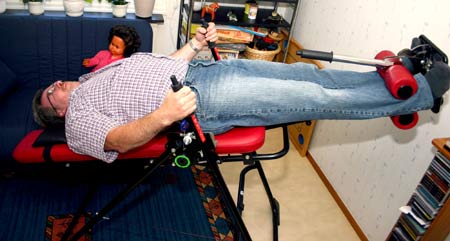